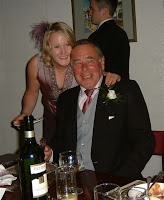 My Dad died of lung cancer in 2007. It was horrible. From diagnosis to death was mercifully short, but it was still horrid. He was 65. He had not smoked for 15 years. He was extremely fit and had plenty to live for. It wasn't fair!


Lung cancer is the UK's biggest cancer killer, claiming the lives of more than 33,500 people in the UK every year - more than leukaemia, breast and prostate cancer combined - yet it receives a mere 3% of all money spent on cancer research in this country. Perhaps it is perceived as an "unsexy" cancer, or a self- inflicted cancer? Whatever the reason, the numbers don't stack up.


November is Lung Cancer Awareness month which aims to raise awareness of lung cancer and of the signs and symptoms of the disease and encourage those at risk to visit their GP.


What are the key symptoms of lung cancer?
What are the top 5 myths about lung cancer?
Myth: Coughing up blood is the earliest sign of lung cancer
Fact: The first symptoms are often a persistent cough or persistent breathlessness
Myth: As a smoker, the damage is already done and there’s no point in giving up
Fact: Quitting at any stage reduces the risk of developing lung cancer and other diseases such as stroke or heart attack. Stopping smoking before middle age avoids most of the risk of smoking-related lung cancer.
Myth: Lung cancer is a male disease
Fact: In the 1950s, the ratio was 1 lung cancer case diagnosed in women for every 6 in men. That ratio is now 3 cases in women for every 4 in men.
Myth: Lung cancer is a death sentence
Fact: When lung cancer is diagnosed at an early stage, there are more treatment options and the chances of surviving it are greatly improved. When lung cancer is found at an early stage, treatment is 40 times more likely to be successful.
Myth: Lung cancer is only a smoker’s disease
Fact: Although smoking is the chief cause of lung cancer, around 1 in 10 cases are not linked to smoking.

So back to my dad. Nothing I have written here can change the fact that my dad died six weeks before my wedding and that he didn't live long enough to meet three of his six grandsons or the seventh grandchild due in February, but perhaps with more funding for research into lung cancer and its treatment, other families can have longer with their loved ones.

The Roy Castle Lung Cancer Foundation is the ONLY charity dedicated to defeating lung cancer. They are an excellent source of support and information on this disease.

They could really do with your support this month.
Posted by sarnison - barnton pharmacy at 17:03